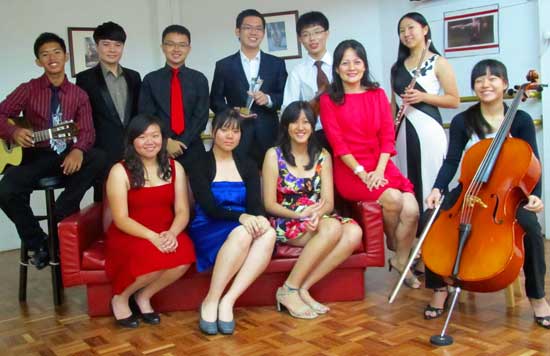 PASSIONATE MUSICIANS: The students who will be performing at the school’s in-house recital share a light moment with Law (fifth right).

IT can be said music plays a significant role in our lives as there is hardly anyone not touched by music in some ways — whether for the enjoyment in performing or listening to soothing tunes from classical to pop.

This rings true for medical student Ryner Lai who plans to continue playing the piano when his undergraduate medical programme starts in London this September.

“I’m looking forward to playing in community ensembles such as churches or choirs. Music helps me relax,” he told thesundaypost.

The 19-year-old former student of International Music House (IMH) always has an affinity with music, having played the piano since he was 10.

His years of studying classical music at IMH was indeed fruitful, exposing him to a world of musical opportunities, including participating in national competitions such as the Roland Piano Festival last year where he finished first runner-up.

Despite opting for a career in medicine, Lai said his love for music will never wane.

“Music will always be my passion. It’s a refuge that allows me to express my feelings while helping me to focus and relax,” he added.

There are many music students who continue to play despite having chosen a career other than music.

“At the end of the day, everything they do in music is done because it’s their passion and that cannot die,” IMH head of Classical Music Studies Florida Law explained.

“As a classical music tutor, my aim is to see the students attain their full potential and the only way to get them out of their comfort zone is to give them an interest to pursue.”

On how to instill this, she said it began with the teacher.

“You need to be a dedicated teacher to understand your work and be able to structure it and give that knowledge to your students.

“But we cannot form an opinion for them because music is a piece of art. As teachers, it’s our responsibility to give our students the basic tools of life through music and guide them.”

A basic but important criterion for the development of a musician is music theory which is often neglected by students.

“As instrumental skills progress, development in music theory is very practical and completely entwined with performance and composition. We shouldn’t see it as a separate subject isolated from the aspects of the lessons.”

According to Sim, it’s very important for students to understand how the written symbols relate to the elements of music in order to interpret and translate them into sounds.

“Music is all about communication and it empowers us to communicate and experience music in a meaningful way.

“For performers, an understanding of theory helps as it enables them to know what’s happening in the music. Apart from that, it gives them a deeper understanding of how the music works and also helps with internalisation and memorisation.

“For composers, it helps to develop an understanding of the compositional procedures and deepen their historical stylistic awareness. With that, you are able to process and appreciate and critique on the music.”

Theory appreciation among students, according to Sim, depends on the approach taken.

“In a theory class, it’s not just learning the notes but also analysing the scores, and the students apply what they’ve learnt in their practical lessons.”

Samuel Po was a recent recipient of this prestigious award for students Grade 6 and above throughout the world. He won £50 for scoring a distinction (95 per cent) in his Associated Board Royal School of Music (ABRSM) Theory Grade 8.

“I was stunned when I learned I had won and am still over the moon,” said Po who found music theory a great way of learning how to apply what he has been taught to composing.

Although students here do not get to attend music recitals or concerts with serial orchestras as often as they should, Sim said they often watched concerts through DVDs and this will help them understand more about how a certain musical piece plays out.

“If a student has never seen an orchestra play, he or she will not know the intensity of the piece. I find this very important. For instance, when higher learning students play the sonatas, they are able to imagine the tone colour of the music,” she said, pointing out that a lot of students, especially the higher learning ones, stopped taking lessons because they didn’t understand what they were playing.

“If you know what’s in the piece, you’re able to intepret, and if you understand the composition, you are able to apply,”

Sim emphasised, revealing that the school often held its own in-house recitals or concerts for the students.

An event on July 31 at 2.30pm will see 11 present and former IMH students converge for an in-house recital and perform pieces from various composers — from Beethoven to Debussy.

“Though a lot of our former students have gone overseas to further their studies, pursuing degrees in law, engineering and so on, each time they come home for the holidays, they are always happy to perform for the school,” Law said.

Kelvin Chong, who has been commended by the school for his gifted piano-playing skills, will be pursuing a degree in law this October but his passion for music will always be there.

“When I play, it relaxes me which I’m going to need when I start my course,” he said with a laugh.

Flutist Michelle Wong, who will be playing a piece by David Heath during the recital, shares the same sentiment, saying music was her way of expressing herself and spreading the joy to people around her.

“Music is what I relate to the most and in my opinion, it’s an art form everyone can relate to,” opined the 20-year-old who will be pursuing a career in music.

“When I graduate, I hope to be the ‘jack of all trades’ in music. I might get into music production or music arrangement but I will also look into teaching so that I can impart my love for music to others,” Wong said.

Law acknowledged that not all IMH students ended up choosing music as their full-time career but she believed that their passion for music would never die.

“The opportunities for them to play are vast and in their own right, they can choose to play at churches, functions or even their universities,where they form their own performing group. That’s success – something you cannot take away from them.”

Apart from the in-house recital, the school’s sister company IMH Academy will organise a choral concert on July 29 at 7.30pm at Pullman Hotel, Kuching.

“It’s the academy’s usual music exchange programme organised regularly to encourage exposure and avenues for our students to mix with overseas students who have also performed at Singapore’s Centre for the Arts.”

In addition, soprano Ee Ping of Singapore — who has performed in various operas and concerts throughout London, Ireland, Malaysia and Singapore — will be giving her rendition of Vissi D’arte by Puccini and Una Voce poco fa by G Rossini. These will no doubt be the highlights of the concert aimed at building IMH Academy’s vocal department, led by Gena Sim, a graduate from La Salle College for the Arts in Singapore.

Tickets for the Love is in the Air — a choral concert by students of Thomas Kuek are priced at RM30 and RM50. For further enquiries, call 082-424658

Please don't hesitate to contact us if you have any enquiry. Thank you.